Resources to help with nursing research

This guide is a quick introduction to the American Psychological Association (APA) Style for references and citations. Be sure to consult the Publication Manual of the APA for either the 6th edication or 7th, depending on the requirements of the school or class that  you are writing for..This page is a number of videos for 6th and 7th edition. . 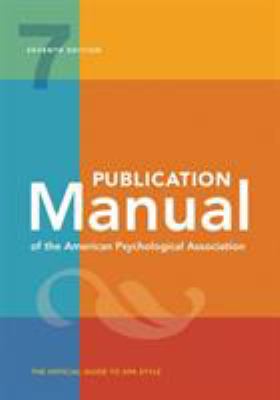 Publication manual of the American Psychological Association by APA

When you reference another source use an in-text citation in the body of your paper.

If you're quoting the exact words of someone else, introduce the quote with an in-text citation in parentheses. Any sentence punctuation goes after the closing parenthesis.

If you're directly quoting more than 40 words, use a blockquote. Block quotes do not require quotation marks. Instead, indent the text 1/2" as a visual cue that you are citing. The in-text citation in parentheses goes after the punctuation of the quote.

While research studies have established that socioeconomic status influences disease incidence, severity and access to healthcare, there has been relatively less study of the specific manner in which low SES influences receipt of quality care and consequent morbidity and mortality among patients with similar disease characteristics, particularly among those who have gained access to the healthcare system. (p. 1021)

Tip: Use direct quotes sparingly! Focus on summarizing the findings from multiple research studies. In the sciences and social sciences, only use the exact phrasing or argument of an individual when necessary. Keep in mind that this tip is possibly more fitting in some schools and/or department than it is in others. Your instructors' guidance and requirements supersede what you find online.

Paraphrasing or summarizing the main research findings or core components from a research article is the preferred method of citing sources in an APA paper. Always include the last name of the author(s) and the year of the article, so that your reader can find the full citation in the reference list, thereby ultimately finding the full source is wanted.

As the disease of heart failure progresses, so does the associated financial strain. A relatively recent study found that health cares costs nearly triple within the final months of life for patients with HF (Obi, 2016).

You will be asked to login to Portico before you can view this document.    Please contact the library if you have any difficulties.

Watch this instructional video to learn how to use MyBib and Zotero within Word.